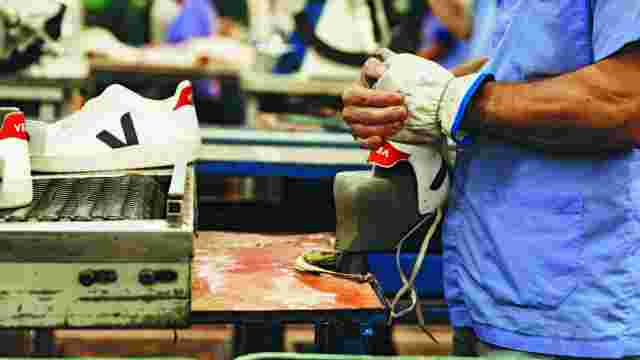 Globalization is an unavoidable phenomenon. Year in, year out, it statistically benefits the entire planet. The Human Development Index (HDI) is steadily improving. However, the economic growth driven by this exacerbated phenomenon of trade has a social and environmental price that impacts especially the countries of the South and the most fragile communities in the countries of the North and the South. To date, the homo economicus, often Western, remains a consumer who must provide for his primary and secondary needs, vital and/or comfort, even hedonism. However, like Sacha D, some people try every day to reconcile consumption, ethics and sustainable development. Consumers are actors rather than consumers. Because we cannot conceive of a production/consumption system that neglects people and the environment. This is what has been driving Sébastien Kopp, co-founder of the Veja eco-responsible sneakers brand alongside François-Ghislain Morillion, for 15 years. These two young entrepreneurs have worked through these « official suppliers » of the CAC40 and the major FMNs, HEC and Dauphine. Perhaps it was their first experiences in large companies that made them fully aware that another world is possible. They explain it on the website of the brand they created.

« In 2003, we are 25 years old and we both meet in a Chinese factory to follow a social audit of a major fashion brand. For three days, we sail among the workers, they have a pale complexion and a tired face. But the factory is clean, and the social conditions are quite good. Everything goes well during the audit, until we ask the plant manager to open the doors of the living areas to us. First of all, it is a categorical refusal. We insist, we push, and finally the door opens.

We find ourselves in a 25 square metre room where Chinese workers sleep at 30, in five-storey bunk beds. In the middle of the room, a hole that serves as both a shower and a toilet.
That day, we thought that globalization had gone wrong. We thought that these workers made the clothes we wear every day. That our families and friends wore every day. And we realized there was a real problem.

Another experience as an auditor will confirm their appetite for a different business model. Both will work for Tristan Lecomte, founder of the Alter Eco brand, one of the leading fair trade groups in France. They will thus go to the other end of the production chain, to meet the small people, the small hands that we never see and will thus reposition them at the heart of the process. What produces for others must be able to live with dignity from their production.

This is where the Veja sneaker project was born. Their good knowledge of Brazil quickly enabled them to design a production line, from the raw material (rubber and cotton) to spinning and assembly « 100% Brasileira ». Veja sneakers, shoes that are really eco-friendly?

The latex, which will give the rubber after the vulcanization process, is here sap from the rubber tree brasiliensis, once endemic to the Amazon. This material made the Manaus region’s fortune before the illegal export of rubber seed to the English colonies in Asia created competition that would be fatal to Brazilian production. Between 1928 and 1934 Henry Ford tried to develop « Fordlandia », a utopian and ephemeral rubber plantation project covering more than 10,000 km² in the State of Para to meet his own elastomer demand. Large-scale monoculture of rubber trees has proved to be environmentally catastrophic, with diseases decimating industrial rubber plans.Veja’s young leaders have opted to buy wild rubber from syringeiros communities (foresters « bleeding » rubber trees to remove precious liquid) who exploit these trees in a traditional way, promoting agroforestry and biodiversity (see photo above)

source : http://www.acritica.com/channels/entretenimento/news/volte-ao-tempo-conheca-a-historia-do-ciclo-da-borracha-no-museu-do-seringa
They also chose to buy only organic cotton from small family businesses in the Northeast, while a large part of Brazilian cotton is GMO. Organic cotton naturally adapts to the semi-arid climate of the region (see photos below).

For these two essential products, the choice was based on environmental but also social motivations. The large farms (latifundios) in the Amazon and the Northeast are

are still all too often places where slave labour is frequent and social conditions are disastrous.

Finally, the final weaving and assembly are done respectively in factories in the suburbs of Sao Paulo and Porto Alegre, places where the trade union tradition has led to significant improvements in working conditions and social benefits for companies. While wages remain lower than in the North, the Veja brand pays wages 30% higher than the Brazilian minimum wage, with 4 weeks of paid holidays and weekends off (op. cit.). The choice of a Brazilian rather than Chinese production necessarily impacts the production cost (18 euros 21 against 5 euros 30, op. cit.), but this choice is voluntary is assumed.

The sneakers are then sent by container ship where they are packed by employees of a social integration centre of Ateliers sans Frontière, supplied with green electricity by Enercoop (op. cit.).

Unfortunately, economic realpolitik does not yet make it possible, as the two leaders agree, to carry out a 100% sustainable development project.

A few more readings on the « Veja » brand