There are now an estimated 12 million Brazilians of Lebanese origin in Brazil, three times more than in the country of the Levant where their families originated, sometimes leaving more than a century ago.

This community has left its mark on the country’s history and economy. The consecration of this common history is undoubtedly the access to the vice-presidency and then to the presidency of the Brazilian Republic of Michel Temer, son of immigrants from the cedar country. Admittedly, this story ended badly, but the inalienable ties between Lebanon and Brazil remain. Some will recall the many Syrian-Lebanese presence on the Brazilian political scene. « Maluf, Haddad, Jereissati, Kassab, Simon, Amin, Feghali, Jatene… there have been dozens of surnames of Arab origin in Congress for decades, in ministries, in the town halls of the country’s largest cities and in the offices of governors ». (www.bbc.com/portuguese/brasil/2016/04/160429_arabes_politica_if_jf)

(In the photo, we recognize the unfortunate candidate in the last presidential election Fernando Haddad, Gabriel Chalita, academic and politician and former President Temer). 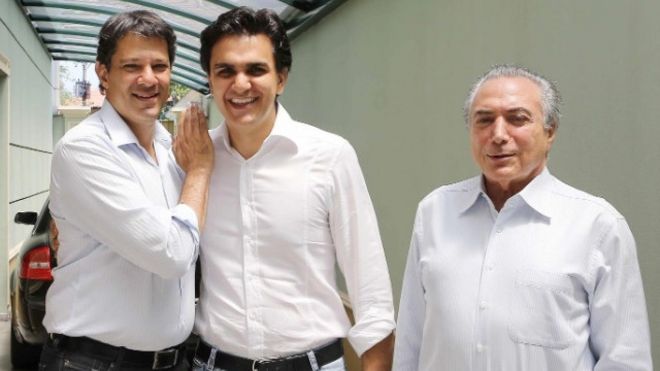 The first Levantine immigrants, often called « Turcos » (Turks) in Brazil because their country was then under Ottoman control, arrived in Brazil in 1880 to escape the misery and religious persecution they suffered under Ottoman rule. Most of them were from Maronite or Syriac communities, which are in the minority in the region. As Rosa Amorim points out, the geographical situation is one of the factors explaining the tradition of emigration of Syrian-Lebanese: « Syria is a narrow strip of land of 185,180 km², bordered by the Mediterranean in the west and by the desert in the east. Lebanon is a territory of 10,400 km². The situation of this country, « walled up » between land and mountains, pushed the Phoenicians to turn early to trade rather than agriculture ». The whims of history will give them a Turkish passport until 1892, then a Syrian passport until 1926 and finally the Lebanese passport, but, as history goes on, the term « Turkish » will accompany them until today/

It is in the most urban or economically and demographically dynamic Brazilian states that the Lebanese will settle in greater numbers. In São Paulo, Rio de Janeiro, Minas Gerais, Pará and Goiás they will be street vendors rather than farmers in coffee plantations. In Amazonia, they will supply the « syringueiros », gemmers who recovered latex, sap from the rubber tree brasiliensis, to produce the rubber, a precious elastomer that would make Manaus’ fortune (ibidem).

The discovery of America by the Turks: the game of chance and the ambiguity of the term « America »

In his eponymous novel, « The Discovery of America by the Turks », the wonderful Bahian writer Jorge Amado described the presence of this community that arrived with its specificities and that would quickly find its place in a country that was so different from the one they had left. He consciously used the term « America » instead of « Brazil » to recall the ambiguity of the term « America » for candidates leaving.  While historians agree on the reasons for the departure of Syrian Lebanese from Christian communities (poverty and religious persecution), the choice of Brazil as a destination is controversial.  Some authors explain this choice by the visit of the Brazilian Emperor Dom Pedro II (Peter II) in 1876. This cultured and multilingual man, whom Victor Hugo called « Marcus Aurelius’ grandson », would have seduced his audience with his mastery of Arabic and his taste for oriental culture.  While there is no doubt that this visit would initiate the beginning of the first wave of Levantine immigration to Brazil, it seems, from the documents in the immigration archives, that many Syrian-Lebanese were not really aware of their final destination and thought they were boarding for the United States. Thus, when they landed in Rio or Santos, they thought they were stepping on North American soil (www.infoescola.com/historia/imigracao-libanesa-no-brasil/).  Some had not obtained a visa for the United States and thought that immigration would be easier in Brazil, before perhaps trying their luck again elsewhere. Others came to Brazil to meet friends or family already settled in the hope of a better life (ibidem).

From peddlers to doctors:

Another myth would accompany the history of the Lebanese-Syrian presence in Brazil. « The Levantine immigrants were poor and their talent as traders linked to their Phoenician origins, their taste for effort would have ensured them a rapid economic and social success ». According to Samia Oualalou, Lebanese Syrian immigrants, whether of urban or rural origin, were from the middle and upper classes of their country of origin (https://diplomatique.org.br/arabes-na-america-latina/).  « Em seu país natal, os camponeses já estavam inseridos em uma economia monetária, e os que vieram de cidades eram médicos, jornalistas, advogados ou acadêmicos » (ibidem) This « constructor » myth seems to have had two major virtues, it has ensured the cohesion throughout Latin America of a community that is diverse and complex and has facilitated the acceptance of « Turcos » by a Brazilian society that is mainly of European origin.

Social success is partly explained by the status of immigrants upon leaving their country of origin. According to Oswaldo Truzzi, professor at the Federal University of São Carlos, author of « Patrícios: sírios e libaneses em São Paulo », while the Italians and Japanese were responding to the Brazilian state’s call for rural and industrial labour following the abolition of slavery, the Syrian-Lebanese came spontaneously. In fact, they did not massively integrate the latifundios, where workers lived in conditions close to slavery (which is unfortunately still sometimes the case). They have turned massively to the profession of « mascate » (peddler, editor’s note). They sold on credit, door-to-door and bought stalls when business was booming. With the last jolts of the sick old man, the Ottoman Empire, the Lebanese flow to prosperous Brazil has intensified. With the crisis of 29, the Lebanese Brazilians who had economies invested massively in industry or trade. The decrease in discounts to Lebanon has effectively fixed activities in Brazil, favouring family transfers of companies. « Some have created textile and clothing industries. « The colony’s progress has led to spectacular mobility, much greater than that of Italians, Spaniards and Portuguese, » Truzzi (op. cit.) said. 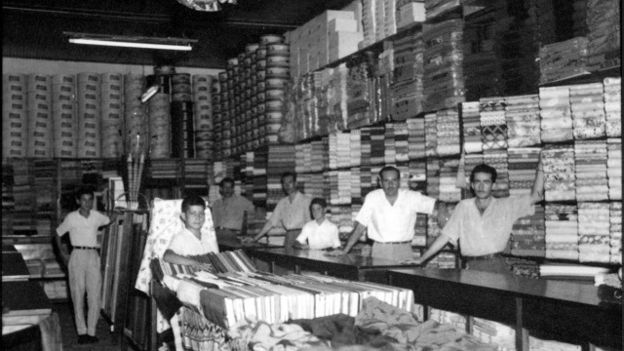 With the title « doutor » (doctor, editor’s note) adorning the plaques of the wealthy houses of the liberal professions, immigrants quickly perceived the opportunities for social advancement that legal, medical and engineering training provided. They then invested massively in their children’s education. Many Lebanese Brazilians have turned to the professions of lawyers, jurists and doctors. 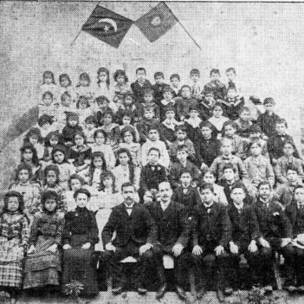 The Lebanese-Syrian imprint is multiple (politics, gastronomy, education, industry, trade), an extension of 6000 years of Phoenician history and seems to show in these times of withdrawal, that difference is often a wealth.