Exit Trump! For many Democrats and environmentalists, what appeared to be a pious wish for 4 long years is now a political reality. The White House has changed tenants. To quote the title of an article in Le Monde with caustic accents, Bolsonaro, the self-proclaimed « Trump of the Tropics » has lost his « imaginary friend » (https://www.lemonde.fr/international/article/2020/11/10/elections-americaines-au-bresil-jair-bolsonaro-perd-trump-son-ami-imaginaire_6059220_3210.html). His base and certainties may have cracked. The same daily to resume « He (Bolsonaro) is one of the great losers of the last American presidential election. With the defeat of Donald Trump, Jair Bolsonaro has suddenly lost a model, a mentor and his only real ally on the international scene ».  He is one of the few active heads of state who still has not congratulated the new American President Joe Biden on his victory. Certainly, Donald Trump continues to play the stolen victory card, but the president’s unease is deeper and calls into question some of the struggles that he has made his campaign « mark ». 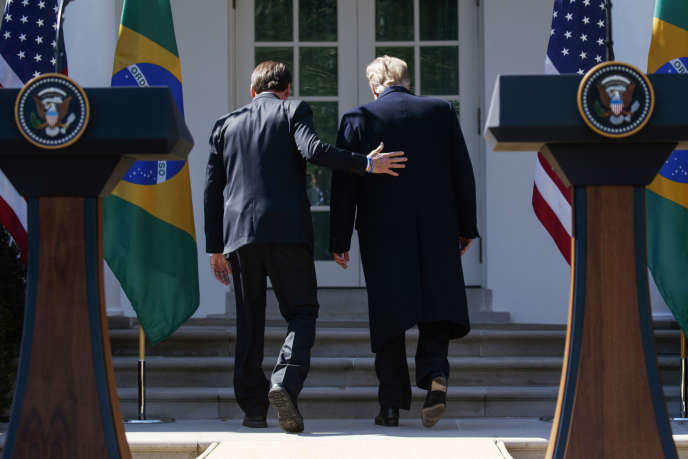 The Codiv19? For the two heads of state, it is a viral disease that will tend to disappear naturally after collective immunization of the population. In both countries, the regional executives have opposed or even disobeyed official policies by organizing a confinement against this « grippette » (Gripezinha in the text, according to Bolsonaro). The results: the two countries are the most affected countries in the world in terms of mortality related to the virus, with 241,000 and 164,000 deaths respectively.
The Amazon and sustainable resource management in general? Like Trump, Bolsonaro is not growing with global warming. Both have tried to promote local production of fossil energy and Bolsonaro has championed the exploitation of the Amazon. He has encouraged mining in previously protected territories. Out of nationalism, he drastically cut the budget of the Ministry of the Environment. Cerrados and Mato Grasso have been delivered as pasture to the GMO soybean makers. While the current Brazilian president alone can be blamed for Brazil’s predation on its immense primary forests and its nature in general (his predecessors had at best allowed it to happen), Bolsonaro’s irresponsible words were illustrated by the fact that the Amazon was prey to fires of unprecedented size and that the effects of forest destruction on regional rainfall and global warming were becoming increasingly well known and recognized by international experts. New President Biden told Donald Trump in a televised debate, « Stop destroying the (Amazon) forest! If you continue, you will face significant economic consequences » (ibidem). He promised the creation of a $20 billion fund to save the planet’s green lung.
Foreign and domestic policy? On the most sensitive issues (the Near and Middle East and Cuba, embassy in Israel), Bolsonaro listened to the voice of his master. He stroked the evangelist, agricultural lobbies (called BBB, acronym for « oxen, bibles, bullets ») in the most hairy way. Any resemblance with his imaginary friend would not be purely coincidental.
For all that, will the fall of the master lead to the fall of the disciple? For Le Monde journalist Bruno Meyerfeld (op.cit.), nothing is less certain. The anti-Americanism (especially towards the United States, which is considered too left-wing) of certain Brazilians, the nationalism concerning the Amazonian forest and the complexity of a sui generis Brazilian opinion cannot be a sure sign that Bolsonaro will be rejected in the next elections. In Europe itself, populism seems to be doing well. However, the return of a calm and measured discourse at the head of the world’s first power risks isolating Bolsonaro from now on. « With Joe Biden in the White House, his outbursts and insults « will be paid for at a much higher price abroad, » the Brazilian troublemaker, who is honored by part of the international community, is now a target of choice, easy to shoot down, without a protector to defend him from attacks » (op.cit.). Whatever the outcome of the ballot boxes in Brazil, the projects that will bring Brazil to the status of a developed country are enormous: poverty reduction, the fight against inequality and racism, the establishment of a quality education and health system… These evils, these challenges are the same as those of our northern neighbor, which is at the same time honored, criticized and admired. The American people have chosen a « new » tone, more pragmatic and less divisive. Brazil’s infinite wisdom often outweighs its foolishness…