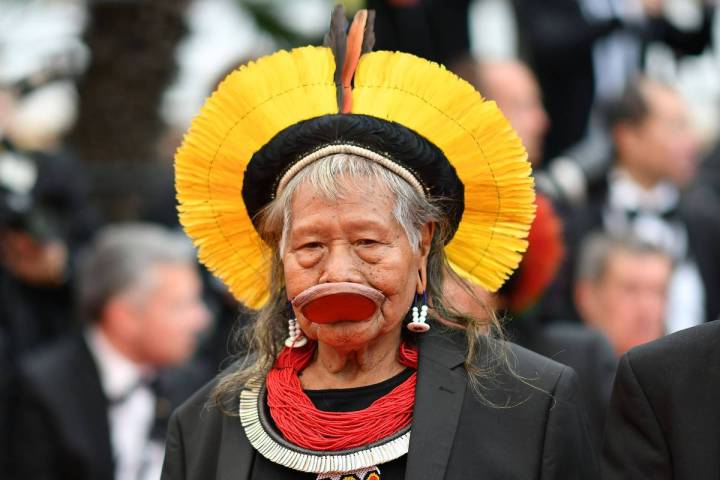 Thirty years after his highly publicized world tour with singer Sting, at the age of 87, Chief Raoni took up his pilgrim stick again for 3 weeks to try again to raise awareness among European leaders of the imminent danger facing humanity if Amazonia continues to disappear at the current rate.

Old Chief Kayapo received the support of President Macron and walked the red carpet at the world’s most famous film festival, just before the screening of Justine Trier’s « Sybil », accompanied by young chiefs and Indians. The animist leader then met Pope Francis. « It’s not just the Indians who are going to die, » says Raoni. He would like to create a « protective green belt » around the indigenous lands of Xingu, a human and natural heritage attacked by transgenic soybean cultivation. This belt would only be one step in an « ecological engineering » approach that would aim to design a more « integrated » land use, such as the Rio green corridors (Les corridors verts à Rio, ou comment remettre la nature dans la ville). In the Western imagination, Amazonia has long been perceived as a « land without man », left in its natural state. The modern state, in its European conception, had the task of developing, controlling and modernising these territories. Long carried by the myth of an infinite territory, this controlled cutting of the Amazon will take the form of violent predation, where the native appears ultimately as an affront to the displayed modernity of the Brazilian state. Nature’s eroticism has succumbed to the thanatos of modernity. However, we cannot and must not succumb to the temptation to conceive the history of the coexistence of the human species and nature as symbiotic. This story has always been marked by predation. Simply put, the acceleration of the destruction of the Amazonian biome has accelerated since the policy of « colonization » of the Amazon by pioneering fronts in the 1960s by the military government. It was about giving land without men to men without land.

Today, Amazonia and Brazil’s gigantic natural areas appear to be the providers of economic growth for a country that has, according to economists, « reprimarised ». For the current Brazilian President, on the contrary, these opportunities must be exploited, as Brazilian environmental laws are sufficient safeguards. Jean-Pierre Dutilleux, the ethnologist who accompanied him for nearly 4 decades, explains that this is certainly Raoni’s last tour, may it not be that of an « announced death » of the Amazon.

With this support, the cacique Kayapo intends to meet with Brazilian President Bolsonaro, to make him understand that Amazonia is a common heritage.